Peter Zumthor once said that an architect should work “to develop the use of the building together with the client, in a process, so that as we go along we become more intelligent”.

And rarely has it been more apparent than working with Clearleft on their new home at 68 Middle Street. Their new offices, based in the heart of Brighton’s old quarter form a centre point of a broader facility that includes meeting rooms, forums, event spaces and an auditorium that talks just as much about the companies own intent as it does it’s relationship to the broader digital community.

As Architects’ working closely with Clearleft from the outset it became apparent that the interior of the structure had to represent, in part, the exterior face, ethos and design approach of Clearleft and as such, the importance of the challenge was set. In order to establish an understanding of common direction, we embarked on a series of works shops with Andy, Rich, Sophie and the rest of the team.

It struck us that there was a genuine involvement with everyone within Clearleft to comment and influence the design process. This democratic approach galvanized the importance of creating a space that addresses the broad needs and requirements of all of the users.

The workshops were key in enabling us to understand Clearleft as a company and for us to express our design intentions within the brief. The process of working with design-based clients has been an enriching one with many syntactical and linguistic similarities between both parties and as a result, the vision of the spaces has been formed through a dual process that is greater than the individual sums of its parts.

Certain reoccurring themes were raised that could characterise the spaces at 68 Middle Street:

As a design-based group and with a closely knitted team, it was essential to be able to create an environment that was both open visually but also allowed for spontaneity and flexibility of function for the various spaces. As a result, one of the first strategic moves was to establish the walls and the floors that could be removed from the building and how they would influence the residual interconnected spaces. The original 70’s office building had a very formal and vertical arrangement with an implied hierarchical element and by removing elements we could begin to craft a working space suitable the 21st century.

In my view, the most important move was to remove a third of the floor plate from the second floor and to completely open up the rear of the structure at first floor level to open out onto a new urban roof terrace. This allowed a horizontal view of over 35 meters and the creation of a double height space that connects a glazed meeting room, steel gantry and workshop gallery space with the main Clearleft office space. On the ground floor we embarked on a similar exercise, removing all of original internal walls and re-configuring a new auditorium / gallery, bar / meeting space, meeting room and office space.

Again, the visual connections and flexibility of space was the driving factors. An example of this approach is highlighted through the client’s wish to have an articulated electric aluminium and glass ‘up and over’ door in between the bar meeting space and the meeting room. It forms a greater degree of flexibility in how the two spaces are used and creates a moment of theatre as it opens.

On establishing the spatial and organizational strategy for the project our attention turned to creating a visual language that could connect the spaces whilst having a simple material palette that would allow the users of the spaces a metaphoric canvas to project their work on.

It was decided that a modest, natural palette of birch faced ply, white board-walls, mild steel, concrete and glass would be best suited to form the canvas. The materials are all in an ‘un-finished’ state, without gloss or varnish, the materials can express their quiet quality and beauty without dominating the spaces.

With all architectural work the acid test is in its inhabitation and I truly hope that the users at Clearleft will enjoy the space as much as we have enjoyed collaborating and designing. 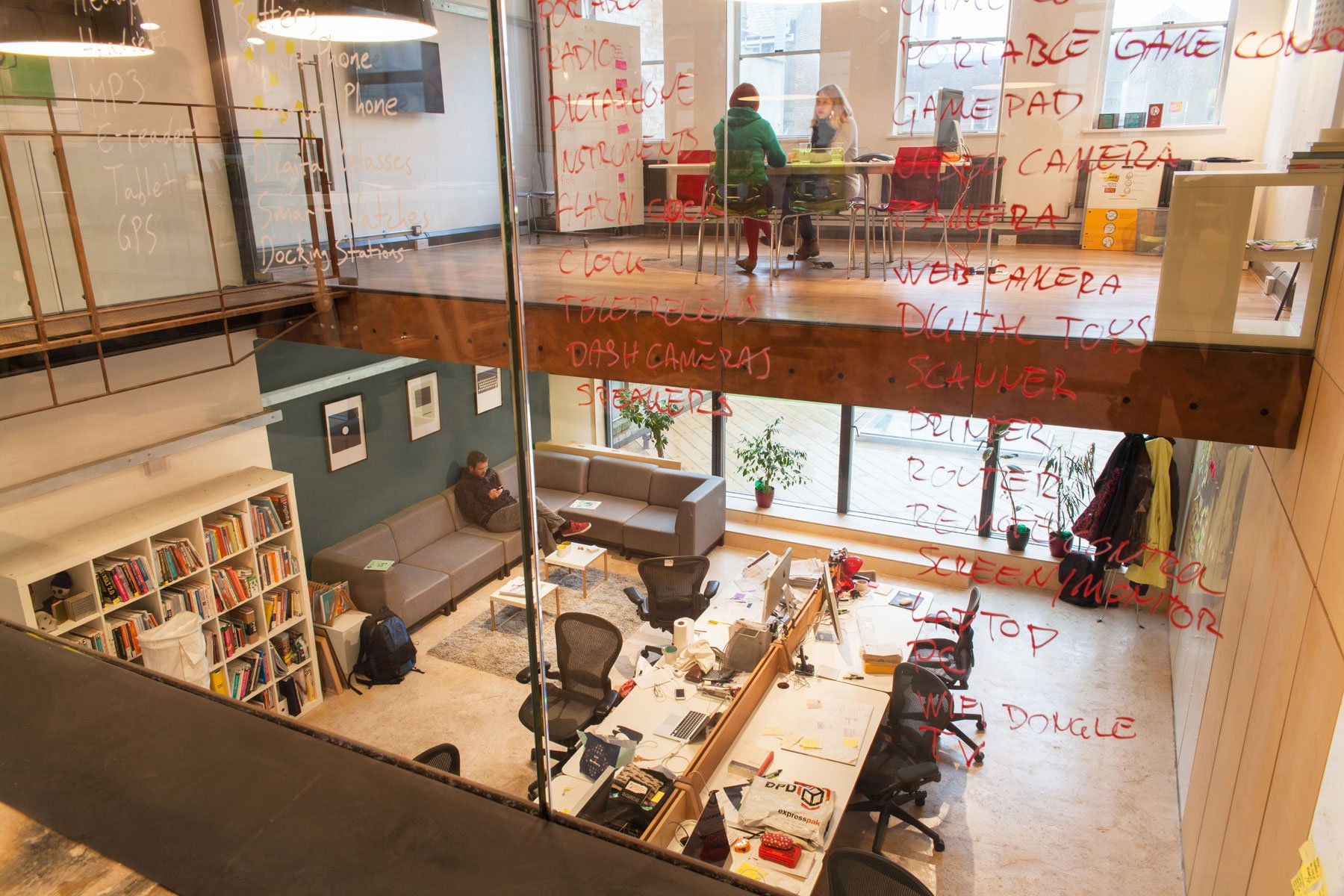 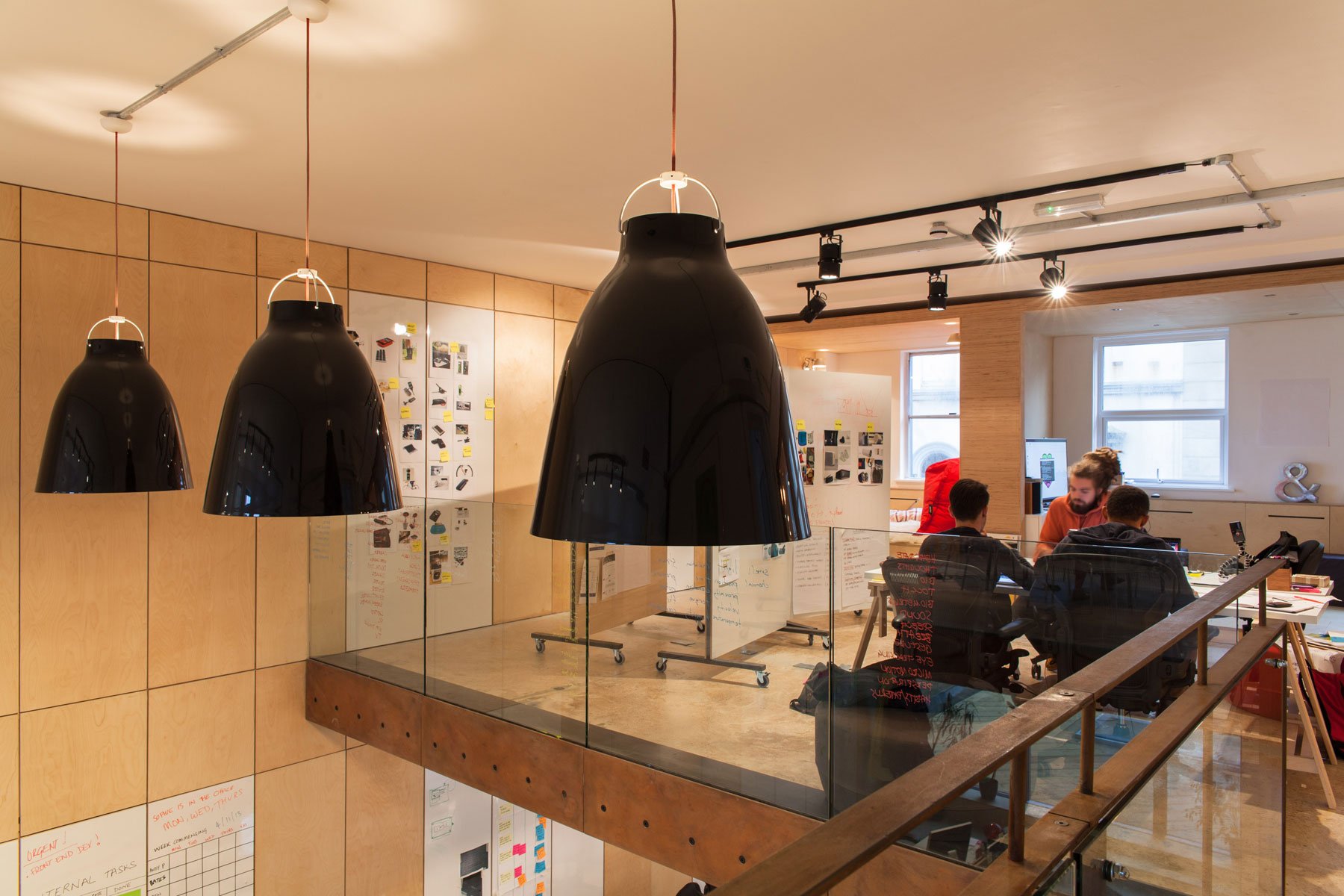 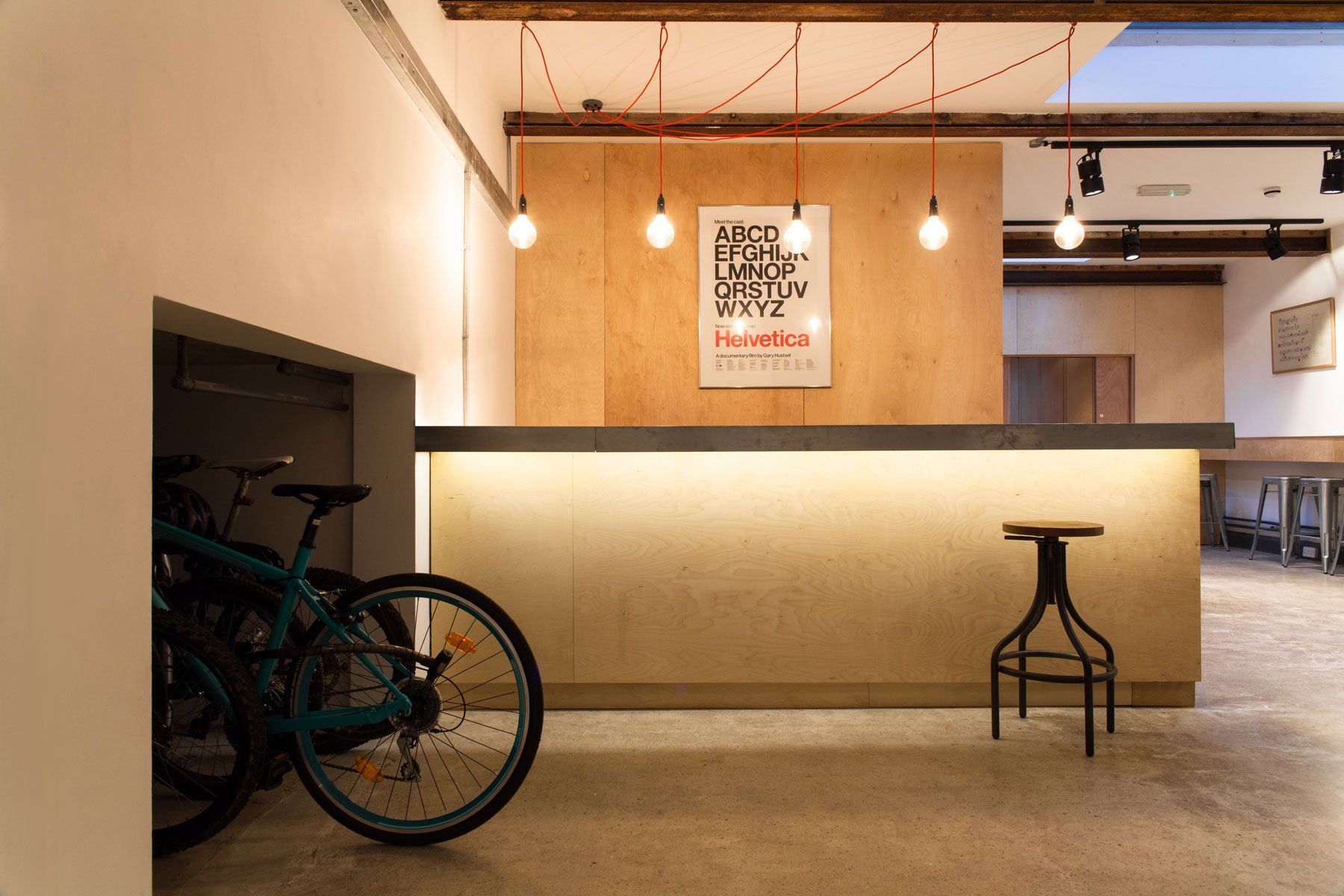 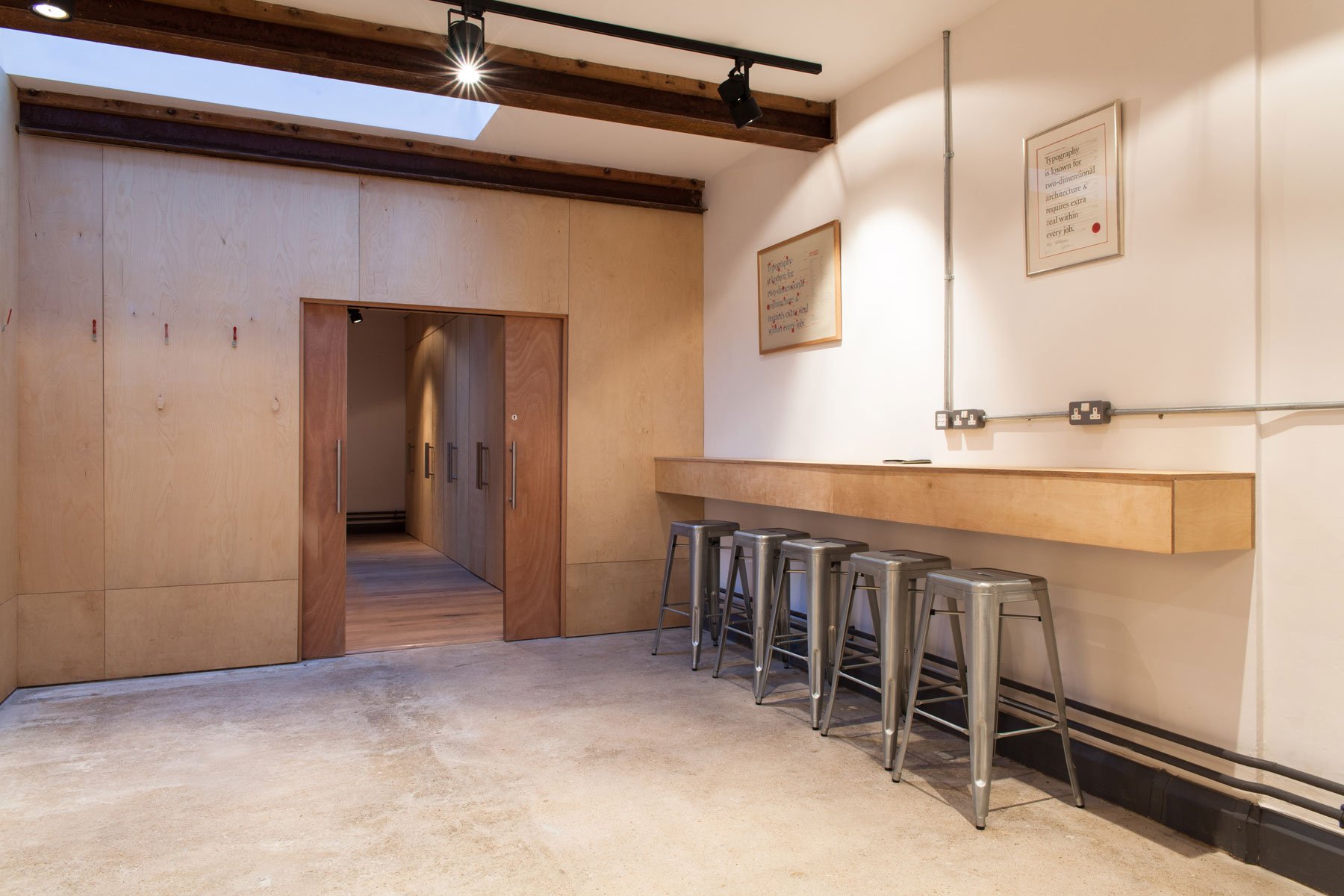 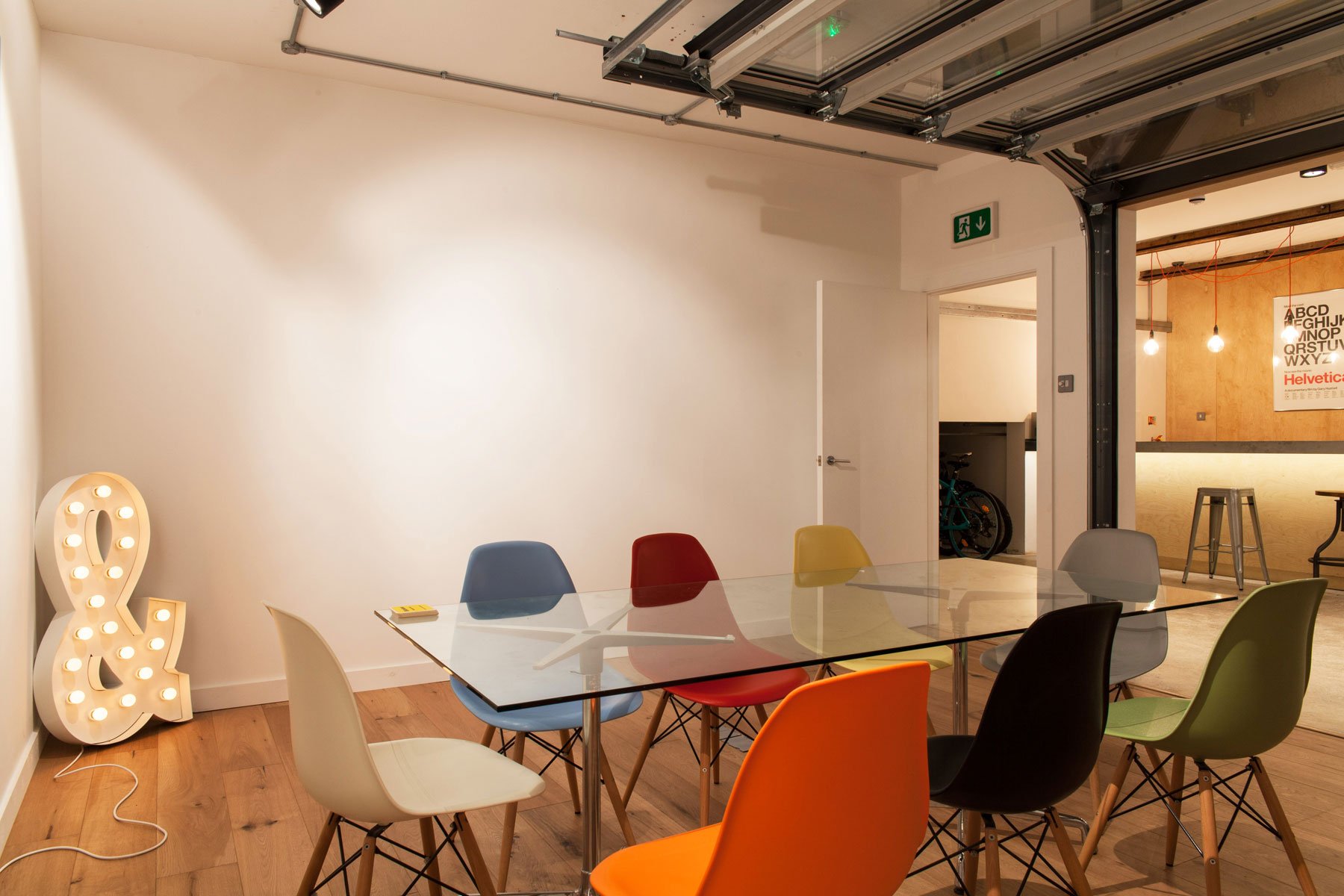 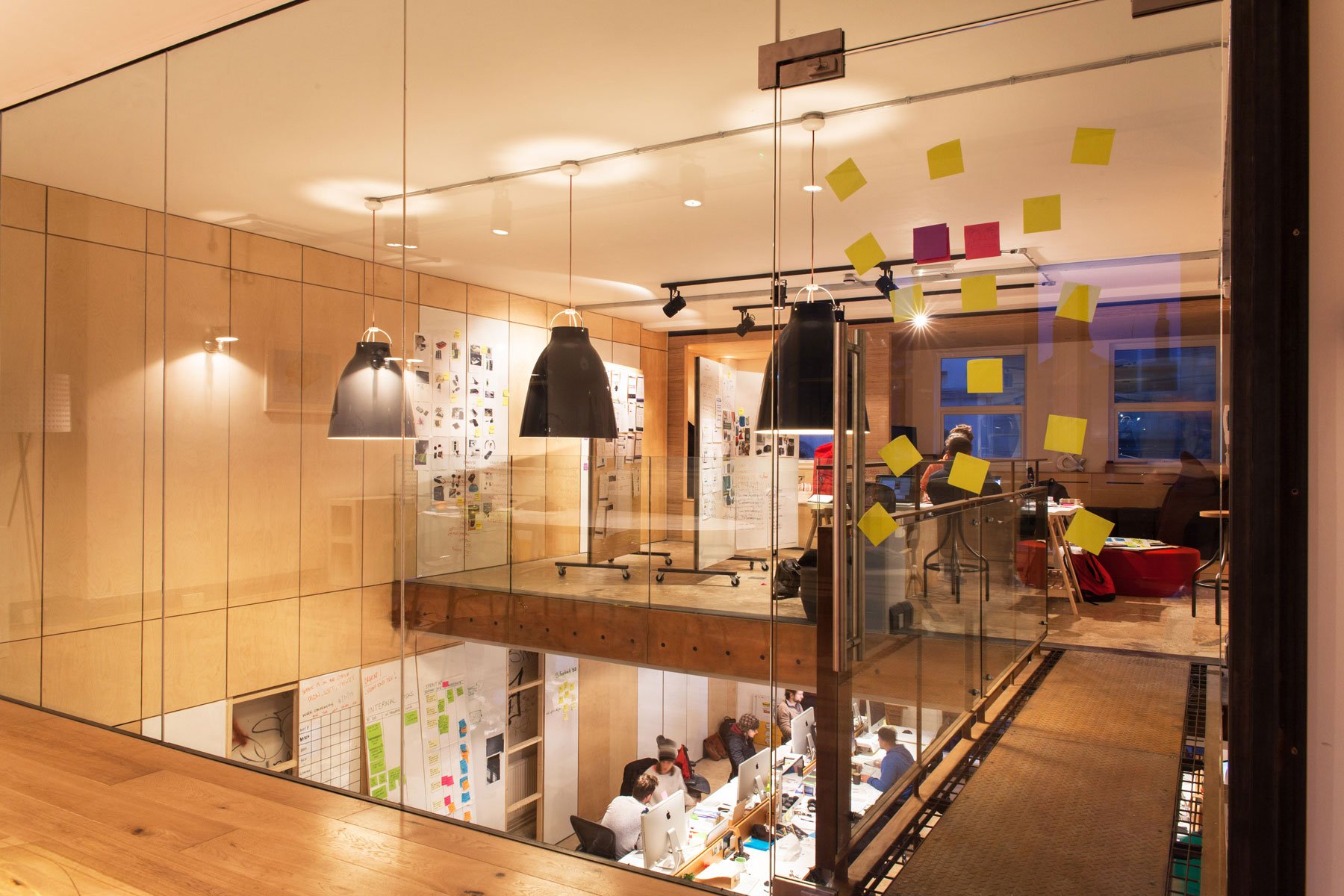 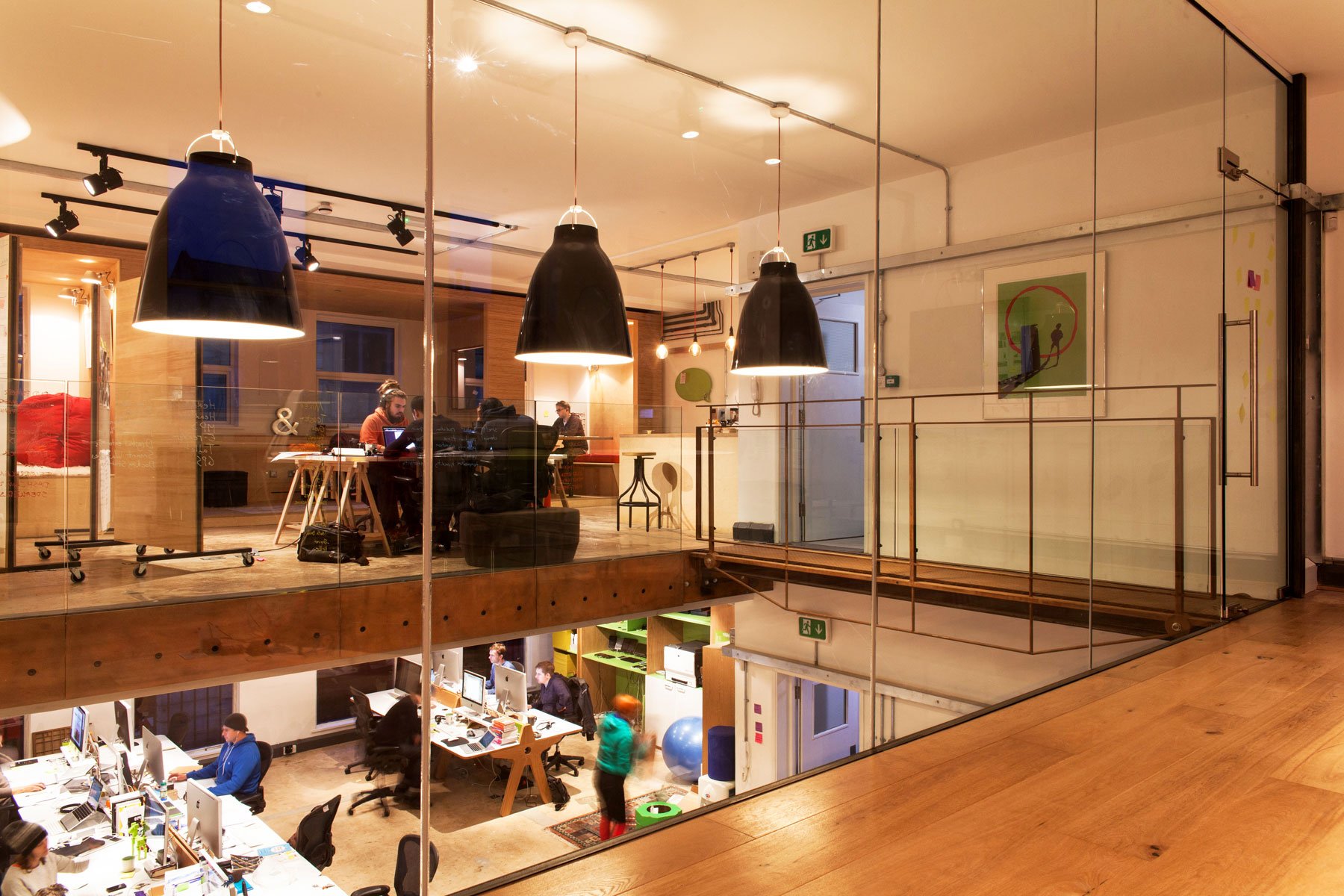 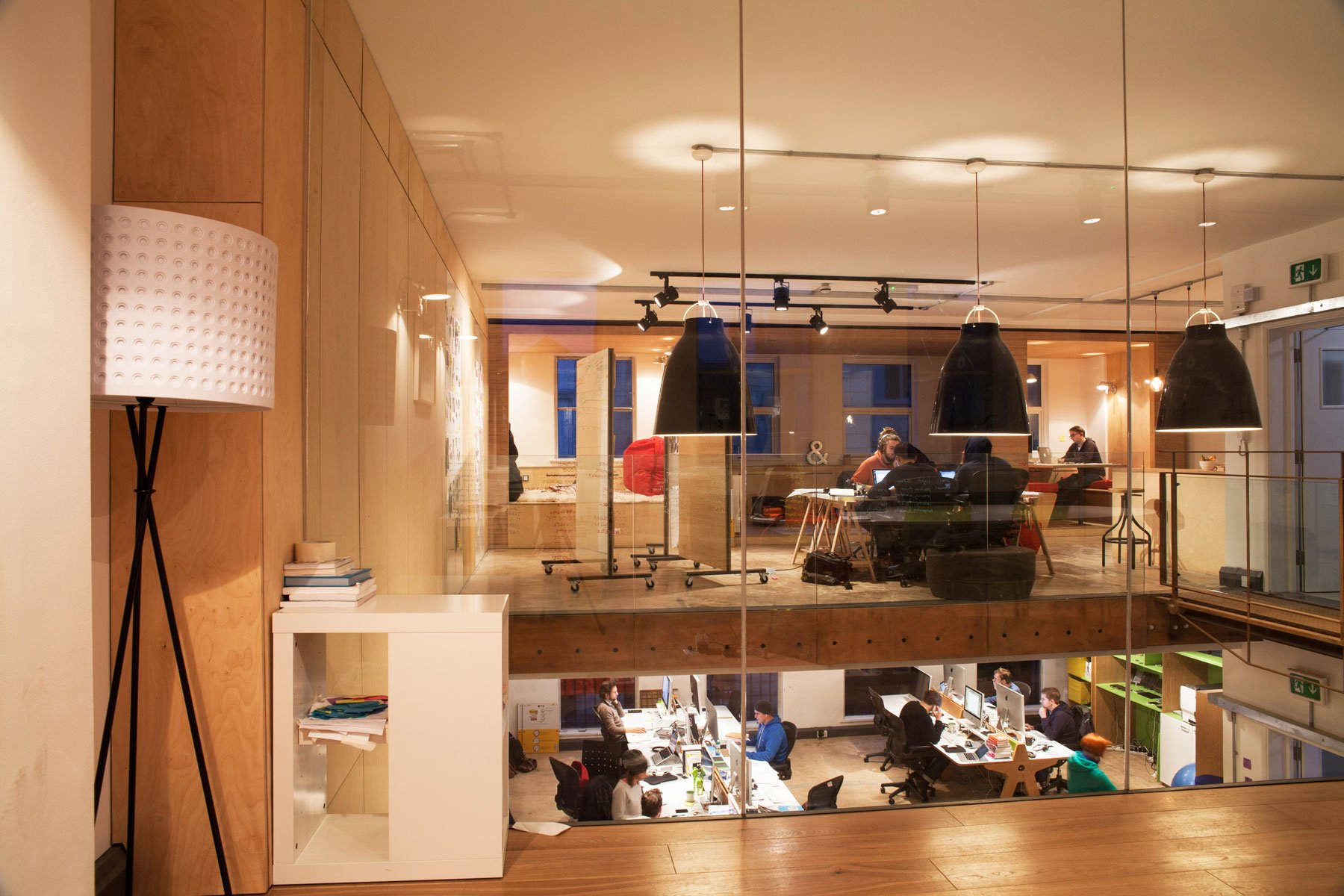 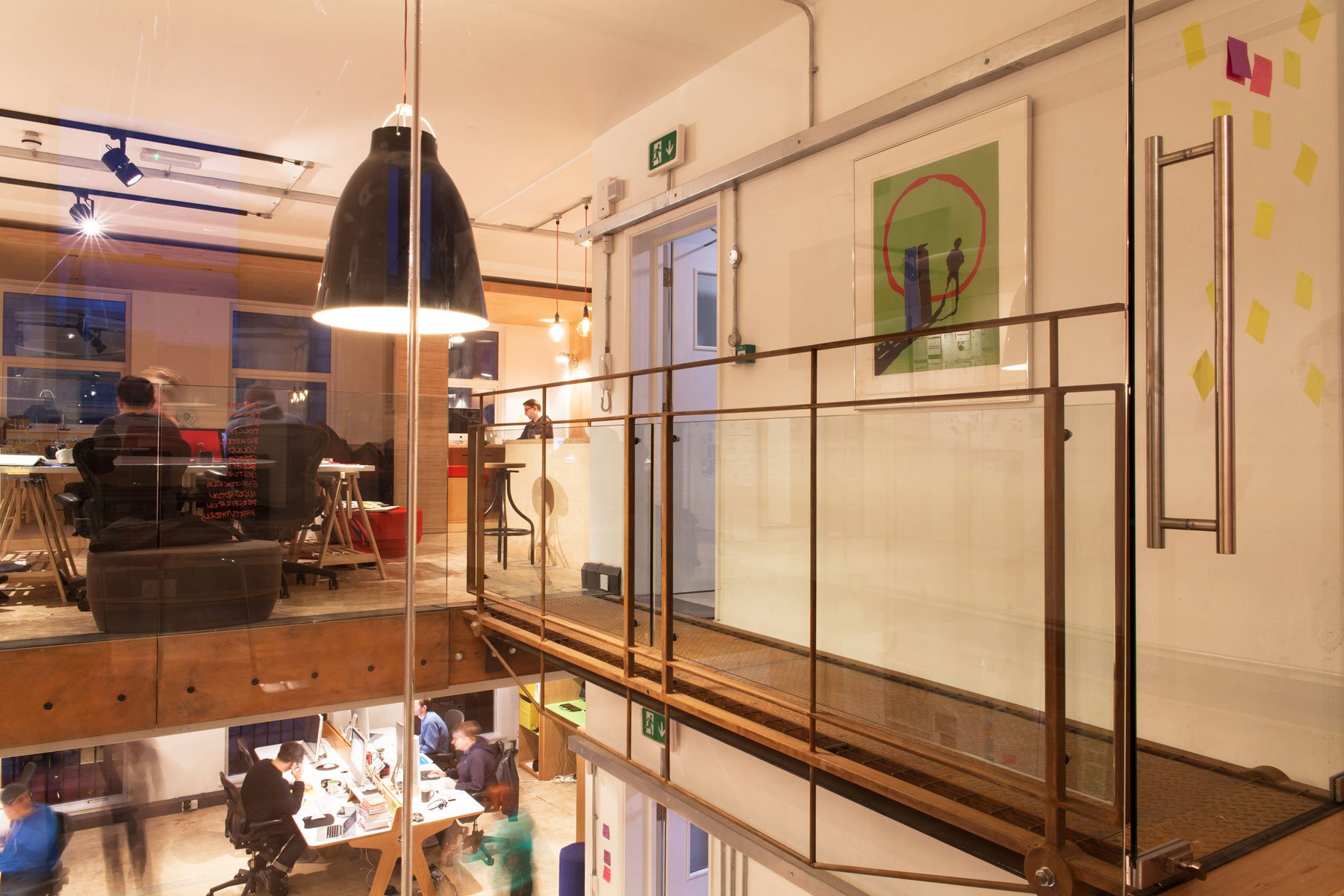 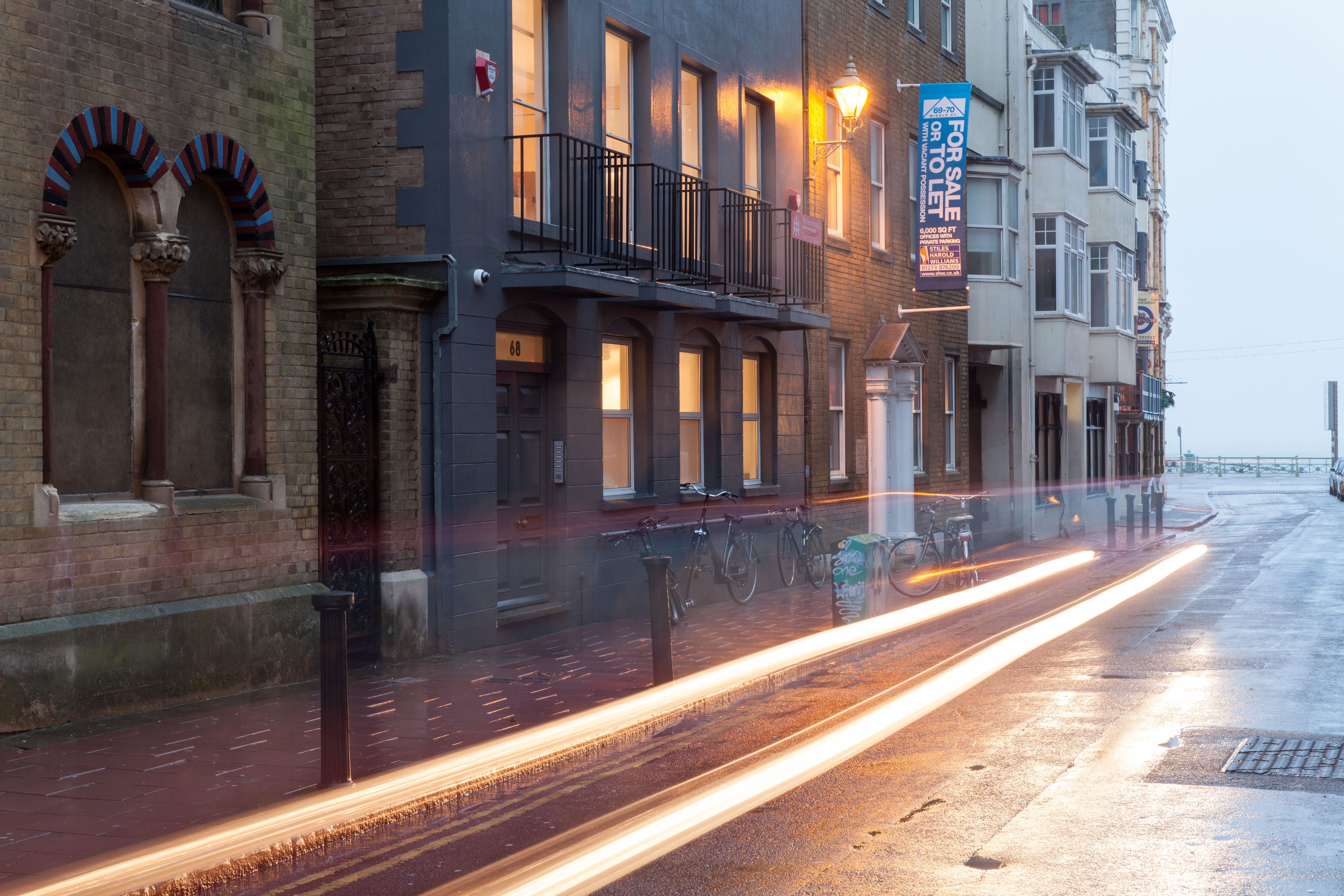 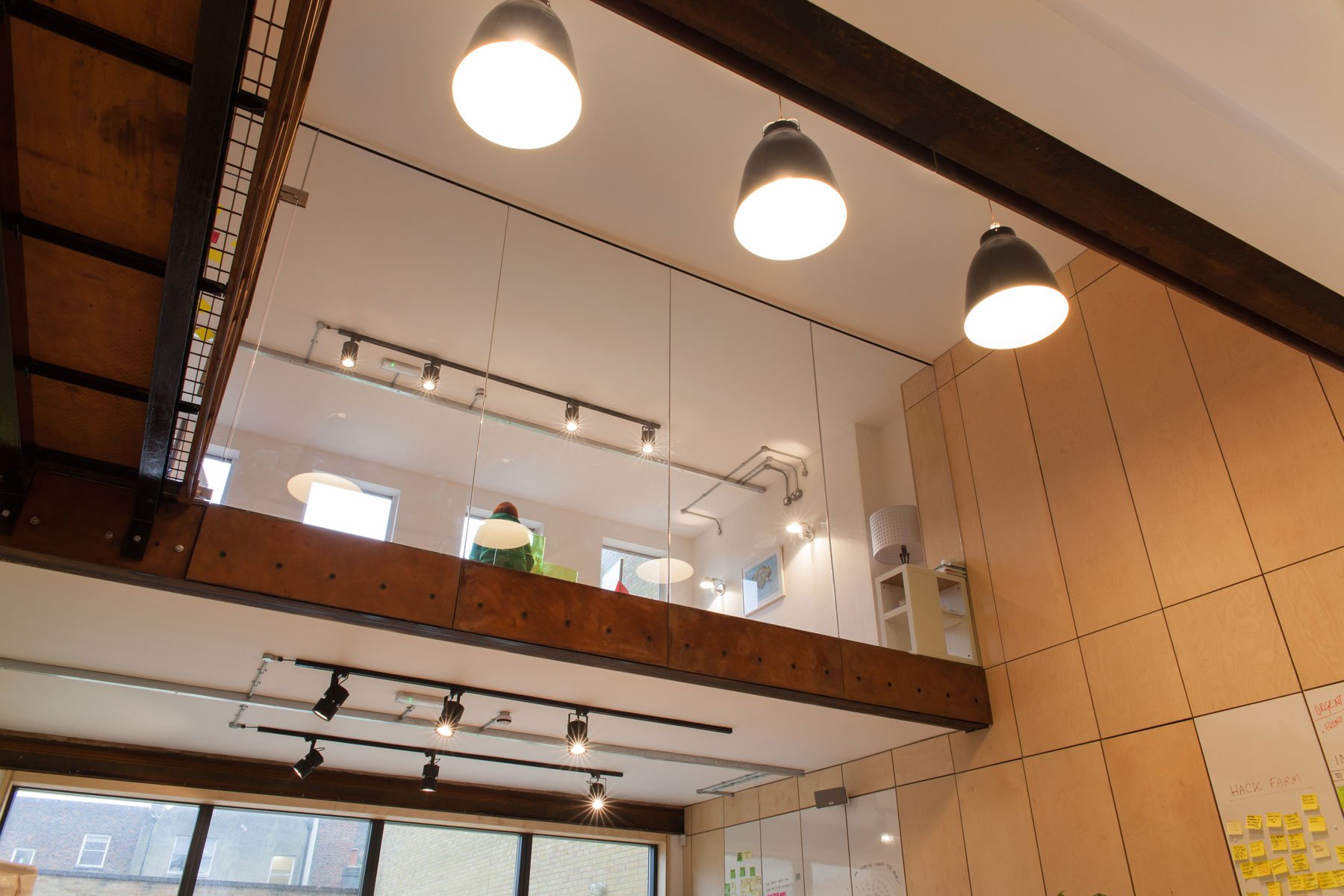 ‹ The Ginger Pig – Boutique Hotel
Back to Projects